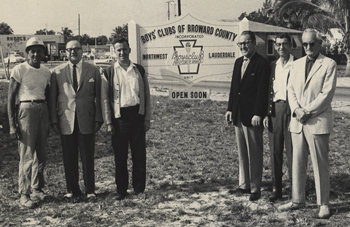 In 1965, a committee of five community members came together to found the Boys Club of Broward to serve boys in underserved communities in the Ft. Lauderdale area.  During the first two years, utilizing abandoned Church locations, the doors were opened at two Clubs, which are now known as the Lester H. White and Nan Knox Units.  Having a significant impact on decreasing vandalism claims and juvenile arrest rates in the communities where they were located, the demand for Clubs grew over the next 20 years and 7 more Clubs were opened in neighborhoods across Broward County.

In 1990, when it became evident that girls were just as in need as boys of a safe, nurturing, out-of-school time facility, the Board agreed to modify existing Clubs, hire additional staff, and expand programming to become the all-embracing Boys & Girls Clubs of Broward County (BGCBC) that exists today.

With the addition of 2 new Clubs in the late 1990's and the chartering of a Club solely for teens members, the Boys & Girls Clubs of Broward County is now made up of 12 chartered Clubs with a membership of over 12,500 youth. Supported by many of the most prominent members of our community, BGCBC is proud to be the 5th largest Club in the nation.

50th Anniversary Brochure as seen in the SunSentinel4.15 MB