Each year, Jersey Mike’s Subs shops around the country host a Month of Giving / Day of Giving event, held in March, in which they invite customers to donate to the featured local charity at checkout and receive a free sub. On the Day of Giving event, stores donate 100% of total sales to charity.

For the past three years, Jersey Mike’s Subs has generously chosen the Boys & Girls Clubs of Broward County for these events and each year the dollars raised have increased.  This year, the 10 participating locations raised $52,840, which is a 37% increase over last year.  Patti Roland, Jersey Mike’s Market Manager and BGCBC board member said, “Every year we are amazed by our loyal Jersey Mike’s fans who take time out of their busy lives to donate to our local charities during our Month of Giving.  This year was an incredible success and we couldn’t have achieved it without your support.  It’s overwhelming to be a part of company where we can personally make a difference on a daily basis while giving back to a charity that holds a special place in our hearts. Thank you everyone for making this possible by supporting our Jersey Mike’s efforts to raise funds which will support the Boys & Girls Clubs of Broward County this year.  We appreciate you!”

Jersey Mike’s Subs, known for its authentic fresh sliced/fresh grilled subs, joined with its generous customers this March during the 9th Annual “Month of Giving” to raise a record amount of more than $7.3 million to help charities nationwide.   This is over $1 million more than was raised during last year’s campaign. 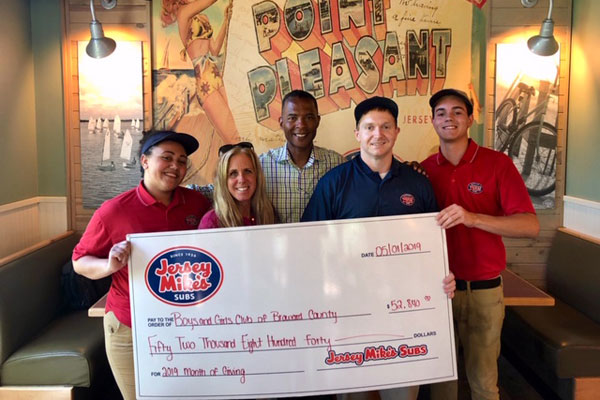